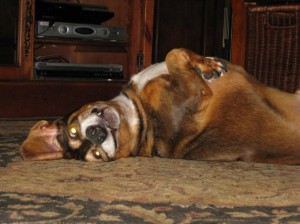 Milo always had a different view of the world around him

Most mornings for the past couple of years I get up and cook breakfast for everyone. When I say everyone, I mean me, my wife, and the dogs. I cook 7 strips of turkey bacon, 3 for me, 2 for Charlie, 1 for Milo, and 1 for Gracie. I cook 3 eggs, 2 for me, 1 for Charlie, she usually saves 1 bite of her egg for each dog. I heat up some black beans and I'm the only one that eats those....not sure why. I sprinkle a little cheese on the top of each over medium egg to give us a high protein low carb breakfast to start our day. After cooking, I turn on the TV and watch a couple of episodes of Bernie Mac while we eat. Then it's off to the office (a.k.a. the second bedroom) to work.

Charlie found Milo online at a Basset rescue service. He was 1 year old and had been abused. She paid the $50 flight fee and had him flown from his current location to her place in New Orleans. He's been with her ever since. I came in to the picture in November of 2000. His solid stature and hefty bark backed me up pretty quickly when I entered 'his' house for the first time. Charlie laughed and said he's just playing. He didn't sound like it at the time, but later I learned he was just playing. Charlie was a package deal. If I wanted her, I had to accept the dog. I love dogs, but he was the most stubborn dog I'd EVER come across. He and I had our moments of disagreement but we had way more moments of companionship. He lived with us in Memphis, Mobile, Gulf Breeze, Pensacola, and Pigeon Forge. We took him cross country with us to LA for a 5 month stay where he and I both experienced our first earthquake. Neither of us were too fond, but he was more shook up than I was....I think. He's been through hurricanes, on TV, in parades, and costume contests. He's been laughed at, run from, loved on, adored, spoiled, cuddled, all the while keeping his charm and making more people smile than I care to count. He's been near death on more than one occasion and for a slow dog he managed to outrun the reaper each time. He's been in cars, trucks, planes, and traveled more miles and saw more places than most people. And even though he was neutered, it never stopped him from trying to hook up with the ladies. Especially the ones that were far taller than he was. I'm not sure how he thought it was suppose to work, but we weren't going to provide a stepping stool for him to experiment. In his prime, if he wore jeans, he would've worn a size 34" x 4". : ) And every place we've lived, he always claimed the closet in the master bedroom as his room. He liked to dress up and was more fond of his bomber jacket in the winter time than any other thing he wore. He was a part-time greeter at The Barker Lounge and welcomed all who came. Charlie even made him a Walmart blue vest with Welcome To The Barker Lounge embroidered on the side.

Less than a year ago Milo (16 y/o Basset Hound) was diagnosed with congestive heart failure. It's quite common in dogs his age. He was given some heart pills and water pills to help him cope. He did quite well on this medication and life was mostly normal. The water pills made him thirsty which made him pee more so it was more daily trips outside....but that's OK, it made us take more breaks from work and enjoy a few minutes of fresh air while he did his business.

On Sunday May 13th, 2012 we noticed 2 large lumps on his shoulders. Concerned, we went to the vet the very next morning. His appetite was mediocre and he was somewhat mopey. We thought the dreadful day of saying goodbye to a dear friend and family member had come. After being examined by Dr. Ratliff (Excellent Vet) at Mountain Home Vet, he was diagnosed with Lymphoma. Unfortunately, this cancer is quite common in dogs. There are treatment options, but with Milo being 16, chemo really wasn't an option. Dr. Ratliff prescribed steroids and gave us a best case scenario of about 2 months.

The steroids kicked in rather quickly and for the next 2 weeks or so Milo's attitude had returned to normal. Bossy, sassy, hungry, happy go lucky, hard headed, typical Basset behavior. It was good to have him back. After those roughly 2 weeks, the decline started. He started slowing down, having trouble getting up and down the steps to the house, his breathing was heavier, he slept longer, and his appetite deteriorated. We'd go for nice slow walks to the open lot across the street, but eventually, that was too far for him travel. Dr. Ratliff told us that as soon as we knew Milo was uncomfortable and suffering, we'd have to make the call.

Saturday June 9th, 2012. We've had to hold his back legs while he climbs the three steps to the house. Even with us holding him he started to slip and had trouble walking on his own.

Sunday June 10th, 2012. Our 8th wedding anniversary. Milo has no appetite, can hardly stand on his own and his breathing has become even more labored. He was in pain and we had to make the dreaded decision. Our emergency vet, Midland Pet Emergency in Alcoa, TN has seen both dogs for various reasons. We called ahead and told them the situation. We arrived at the vet about 2:50pm and filled out the necessary paperwork. They didn't have a room available at that moment so we carried Milo to a nice patch of grass across the parking lot. He was able to walk on his own which made us start second guessing ourselves about the decision we were about to make. Then he hunched over to do his business and there was blood in his stool. The cancer had taken over. We knew then that as difficult as it was, it was time. We went back in to the office and sat in the waiting room for a few minutes. A room opened up and we carried Milo back and placed him on the table. Normally, he fights us at the vets office but this time, he went almost willingly indicating he was tired and ready to go. By this time we had already said our goodbye's but comforted him nonetheless. The vet came in and consoled us, gave Milo the once over and concurred with our decision. Charlie held his head and told him it was going to be OK as I kept my hand on his side. The vet injected the medicine, a look of peace we hadn't seen for a couple of weeks came to Milo's eye's. Charlie thanked him for being her companion and a few seconds later he was gone. The vet told us to take all the time we needed and quietly exited the room. Milo was at peace and out of pain.

We knew this day was coming. We cried many times just thinking about it. We supported each other and did the best we could to prepare. But the void of not having him around is unbelievable. He wasn't a noisy dog nor did he take up a lot of space. Yet the house seems so empty and quiet even with Gracie and our 2 cats by our side. We each hear a noise that sounds like him waking up and we get up to take him outside. Gracie is still looking for him each time she goes outside. Our cats wander around the house in search of him as well. I sure hope he knew what kind of positive impact he had on our lives. Never in a million years would I have figured the heartache of getting over a pet would be this great. Dogs truly are mans best friend. If you've never had a relationship with a dog, no words can describe what you're missing. 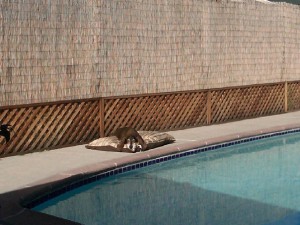 Soaking up some warm California sun during our stay in LA. 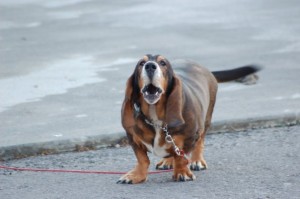 Milo being bossy....normal
This pic captures a lot of his personality. 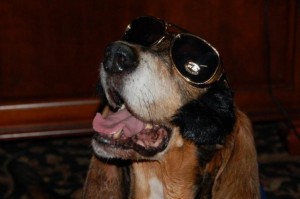 He looks taller and like he's thinking of something very important. Probably remembering we put 3 treats in our pocket and he had only gotten 2.

Milo enjoying the snow.....sort of.