How To Disable AutoPlay Videos in the Facebook Mobile App
Posted By: Brian Gilbert on October 20, 2013

UPDATE:8/29/14 Facebook now provides instructions on how to disable videos on your mobile device. Disable autoplay videos in facebook..

If you've been scrolling through the Facebook App on your iPhone or Android phone recently you may have noticed that videos autoplay silently within the newsfeed. Not everyone will see this 'feature' at this time as it's not available to all users. I was apparently 'lucky' enough to be part of a test group for this 'feature'. I found it very annoying and it raised a major concern. The autoplay of videos will eat up my data plan if I'm not on wifi. Aside from being completely annoying, it opens the door for video ads. Thankfully the videos did play silently unless I clicked on them to view them in 'full screen'.

After doing some research, I found the official release as well as an article from a reputable source. The facebook announcement is here: An Easier Way to Watch Video and an article about this from the Huffington Post is here: http://www.huffingtonpost.com/2013/09/13/facebook-videos_n_3916427.html

What intrigued me the most was the article from the Huffington post stating that users would be able to turn off autoplay. Sign me up. I don't want autoplay. I couldn't find a place with instructions so I had to do some digging on my own.

If you scroll through the newsfeed and find a video that autoplays, simply click in the upper right corner as though you're going to report the video as spam. Within the options presented will be Disable AutoPlay. This feature was recently removed as an option in Instagram so I can't help but think autoplaying videos will be forced on us at some point. 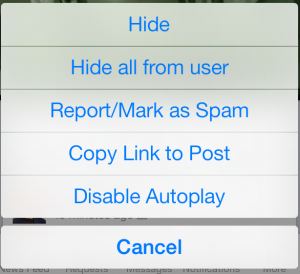 UPDATE 11/8/2013: I'm getting feedback that the Disable option has been taken away. If you want to leave some feedback for Facebook to tell them how annoyed you are with the autoplay 'feature', you can leave feedback for them here: https://www.facebook.com/help/127103474099499

UPDATE 11/9/2013: I was using Facebook via the mobile app and a video autoplayed. I attempted to disable it and the option was not available. I've now uninstalled the mobile app.

UPDATE 11/11/2013: A user commented that you can sort of disable Autoplay in iOS 7 Phone Settings-->Facebook-->Settings-->Auto-play videos on WiFi only. By definition this means videos could still autoplay while on your mobile connection. I've reinstalled the app and am going to play with this setting. I don't expect the outcome to be able to disable videos entirely, but something may be better than nothing. If the videos continue to autoplay while I'm connected via my mobile connection, I'll ditch the app once again.

UPDATE 11/13/2013: With the Auto-play videos on WiFi only disabled, videos autoplay on Wifi AND mobile. With that option turned on, videos only autoplay on Wifi. Obviously browsing Facebook is faster on Wifi but turning on that option and turning off Wifi will disable video autoplay. It is unfortunate that we're not given the option to disable autoplay altogether.

UPDATE 12/7/2013: This article has had over 5,700 views. Apparently autoplay videos aren't very popular with a lot of users if they're seeking out ways to disable them.

UPDATE 12/8/2013: This article has had over 7,000 views. I can only hope each viewer is giving feedback to Facebook about disliking autoplay videos.

UPDATE 12/13/13: I received notification that Facebook mobile for iPad has an update available. The added feature is videos now play automatically in the news feed. LOL! I won't be installing that update.

UPDATE 3/12/2014:Go to this link to give Facebook feedback specifically about autoplay videos. https://www.facebook.com/help/contact/1387634944819628?rdrhc. Also there's a plugin for FireFox and Chrome that lets you disable autoplay videos. I've been using FB Purity for a few weeks now and it's perfect?

UPDATE:5/27/14 The latest Facebook iPhone app (ver 10) allows for autoplay videos to be disabled. On the iPhone, go to Settings-->Facebook-->Settings and select Off for AutoPlay Videos. Don't let Facebook use up unnecessary amounts of your mobile data. If you want to disable autoplay videos on your desktop, you'll need to be using Firefox or Chrome as your browser and install the FBPurity Extension. It's free....but donate...it's worth it.