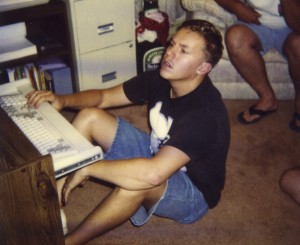 Circa 1995 finishing up installing my 540mb hard drive as my friends watch. Back then we had to manually set jumpers for IRQ's (Interrupt Requests) for each piece of hardware. I promise that's not a hello kitty t-shirt I'm wearing.

If you've read my about page, you'll know that my first computer was a Texas Instruments TI-99/4A in the early 80's. Because of that computer, I'm no stranger to technology. Learning how to program the clocks on VCR's, microwave's, etc. came at an early age. I'm a very logical person so technology makes sense to me. How people use it seems to be the confusing part. Example, posting WAY too much personal information on the internet and wondering how their identity got stolen or how they got fired from their job.

How did I end up here?

I find this to be a question most people ask themselves. And most seem to always say "If you told me 'x' amount of years ago that I'd be [insert current job title here], I'd tell you you're crazy."

My friend, Zak Muscovitch, recently wrote a post titled When Did You First Hear of the Internet?. Reading it and then commenting about the post sort of took me down memory lane and inspired me to write this post.

In 1988 I joined the Air Force to work on airplanes....yep, airplanes. Why not computers? I don't really know. In 1992 while stationed at McGuire AFB, NJ, I went to a friends house. He had a computer all sprawled out on his dining room table and he told me about email. He explained what email was and said he and his mom in Tennessee exchange email to stay in touch. I remember asking this specific question. How long does it take an email to reach her? Is it faster than regular mail? To my amazement, he didn't know the answer. I laugh at those questions today. I'm not 100% certain, but I think they were using Prodigy. We had a computer at work with Windows 3.0 on it....no email or internet, but I could open Print Shop Deluxe and make some kickass banners that printed out via our dot matrix printer.

Fast forward to 1993ish when I got my first x86 based PC. Windows 3.1 which eventually got upgraded to Windows 3.11 (Windows for Workgroups) and then to Windows 95 when it was released. I got my first modem (2400bps) and signed on to my first BBS (Bulletin Board System). Somewhere around 1995 I upgraded to a 14.4k modem and signed up for the internet via HawaiiOnline.com....yes, I was stationed in Hawaii at Hickam AFB. From friends, I knew of webcrawler and just started searching and surfing. I came across a chat program called mIRC. This chat program allowed me to 'talk' with my friends who had the internet as well but were stationed overseas. I also got to meet other folks online as well via different channels with different topics.

Next came the 28.8 modem and faster download speeds over dial up. The first time I was able to download from tucows.com (The Ultimate Collection of Winsock Software) at 3kbps, I was AMAZED at the blazing speed. Then came the 33.6k modem and finally the 56.6k modem with download speeds of up to 6kbps.

I built my first free website at GeoCities.com and specifically remember the little ~ (tilde) in the URL to access personal pages. Yes, I had scrolling and blinking text on my page because I could.

My co-workers and I would play Command & Conquer while working grave shift.....on military computers. LOL! We even figured out how to host a web site from the same government computers. It was so easy. There were no firewalls to bypass at that time. This was 95 or 96. We were such hackers. Remember web ferret? While at work on the super fast government connection I would download all of the popular freeware programs, copy them to my external Zip Drive, take it home and burn them to disc and sell each disc for $10. Most people only had access to dial up so it would've taken forever for them to download the same programs. Easy money. : ) Tucows was one of my favorite sites as well. Anything with a five cow rating got downloaded whether I needed it or not. My first CD burner was 2x speed and was something like $350. I also use to burn music for my friends band and in return I got in to all of the shows for free. Ratt, Dokken, Great White, Warrant, Blue Oyster Cult, etc. at a little club called Gussie L'amour's. I also learned one of my friends knew how to build real websites (not GeoCities sites). I told him we should go down to Waikiki and offer to build websites for hotels so they could put their gift shops online. Not sure why we didn't follow through with that one.

On May 1st, 2000 I hit the mother load. I got a cable modem. I was downloading whatever I could get my hands on via Napster and sharing software, music, and whatever else via my own ftp server.

Remember ICQ? My ICQ number is 347343. Yep, six digits. According to their site, they have over 42 million active users now. It's amazing how some things catch on.

About 2am ish on November 27thish of 2000 I got off work early. I go home, get on my computer to see what sort of trouble I can get in to. : ) My ICQ was open when my computer was on and I see a message from a Charlie. I'm thinking....Charlie....I don't want to chat with a guy. But then I saw the email was Charlotte. We chatted until around 6:30am. Went to a late lunch that same day and have been together ever since. Almost 13 years later, this 'Charlie' is my wife and we've shared many adventures together including our latest with TraileRVania.

At any point in my life in the 90's, if you would've told me that I'd be married to a girl I met online managing a domain portfolio and could work from anywhere as long as I had an internet connection....I would've told you you're crazy.

And that's how I ended up here.....right where I'm supposed to be.