Irwin The Cat
Posted By: Brian Gilbert on November 3, 2014 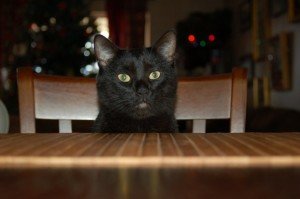 Sir, your waiter will be right over.

We adopted Irwin from PetSmart back in October of 2001, when we lived in Mobile, AL.  We had been to the store looking for a cat on a few occasions, but none seemed to be the right fit.  On one particular day we went, this long black paw came out of the cage and grabbed Charlie's shoulder.  She had be chosen.  This was our new cat.  We were pretty broke at the time and said to each other if he's still here on payday, he's ours.  Friday rolled around, we got off work and went straight to the store.  He was still there.  It was meant to be.  I remember watching the kid who worked there put Irwin in a box.  Irwin was reluctant to go into the box and because the kid wasn't holding Irwin correctly, the kid ended up with a few scratches on his arm.  They gave us Irwin's back story.  He had been dropped off at a Vets office as a kitten in Mobile and they weren't successful in adopting him out.  Irwin was raised at that Vets office before we found him at PetSmart.  He was about 8 months old when we got him.  We paid, signed paperwork, and our adventure began.

We got home to our 1 bedroom apartment where Milo, our basset hound, was eagerly awaiting.  Milo had been around cats before and had no problem.  Our theory is that animals always seem to somehow 'work it out'.  And when you have claws, the odds are in your favor.  We put the box on the ground, opened it and just walked away to let Irwin come out on his own terms.  And he did.  He and Milo seemed to get along almost right away.  Irwin having spent part of his life at a Vets office probably helped with his transition.

He made himself at home very quickly.  Our first Christmas with him, he knocked over the Christmas tree....in the middle of the night.  I'm not sure who it scared more, him or us.  He never messed with another Christmas tree after.

He was a snuggler, a cuddler, and just all around sweet cat.  When people came over, he didn't hide like most cats, he greeted them....and somewhat demanded that they scratch him on the head.  He traveled with us on many occasions and when we got to our destination, he'd come right out of his carrier and make himself comfortable.  Not typical cat behavior.

Sometimes he'd go outside with us when we'd take the dogs out.  Gracie would chase the ball while he'd hunker down in some bushes and attack her as she ran past.  And when we'd come back inside, he'd follow.

On the day we put Milo down, Irwin escaped, caught and killed a baby mole and brought it back to us as a gift to help us feel better.  We thanked him and discarded the baby mole when he wasn't looking.

He was addicted to canned squirt cheese.  When Charlie would get the can out of the cabinet, he'd start talking and waiting for her to share with him.  He did the same thing with canned ravioli.

In August Irwin became very lethargic and didn't talk as much as normal.  We took him to the vet and after a few tests and an ultrasound, the culprit was most likely cancer.  At his age the survival rate is only about 6 months so we chose not to put him through the trauma.  We kept him comfortable.  Friends offered their support in a variety of ways and we appreciate each and every word of encouragement along with the specialty foods sent to try and get Irwin to eat.

The most comforting thing to him was scratching the back of his neck.  We made sure we were doing that as he crossed the rainbow bridge.

We will miss him dearly but it was his time. 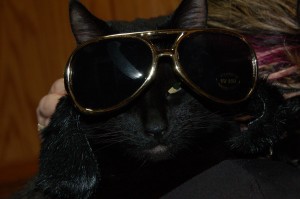 He's not impressed with the Elvis glasses with attached sideburns. 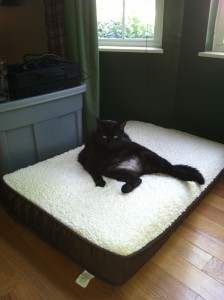 King of the dog bed. 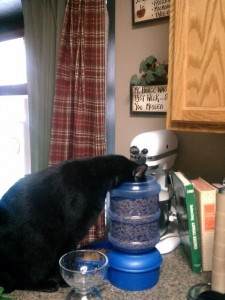 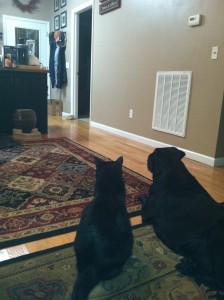 Guarding the door with Gracie. 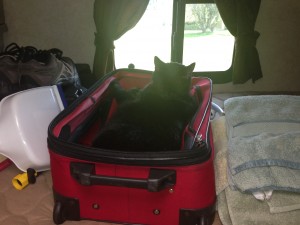 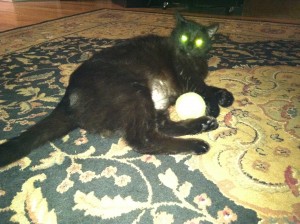 Daring the dog to come get her tennis ball. 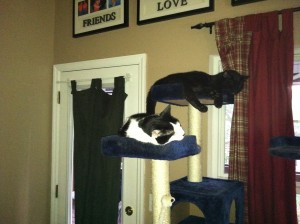 King of the Cat Tower 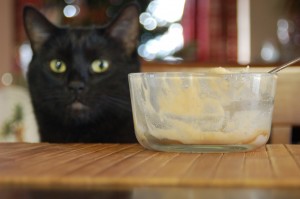 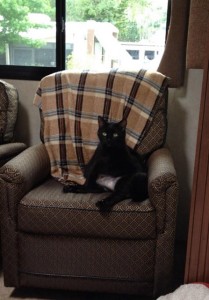 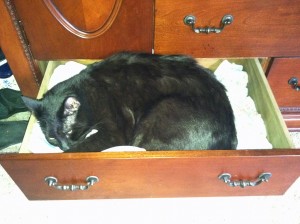 Underwear are so soft to lay on. 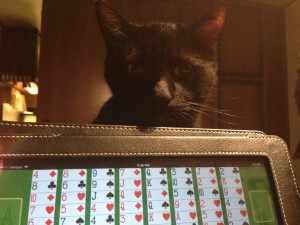 Hi, what are you doing?